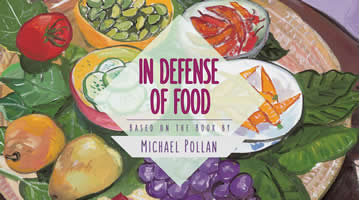 April 26, 2019 By admin Comments are Off in Defense of Food, Michale Pollan, Nutrition

One of my favorite writers on nutrition isn’t a nutritionist or health professional at all. Michael Pollan is a news journalist who got curious as to why there is so much conflicting information about what we should eat in order to be healthy. It seems that every food on the face of the earth has been judged by one weight-loss approach or another. Confounded, he asked, “what is it that we CAN eat to be healthy?”

So he went on a journey around the globe to see what different indigenous populations eat. You can catch his movie called “In Defense of Food” which comes to the brilliant conclusion with three simple food rules. (Have you noticed that brilliance usually is simple?!)

None of these cultures suffer from the chronic diseases we experience here in the US.

So what are the three food rules?

Eat real food.
Not too much.
Mostly plants.

He wrote another book called “Food Rules” chalk full of practical food wisdom, and sheds a bit of light on where the science of nutrition is in its state of development. This is a bit alarming!

Michael tells us, “I learned that in fact science knows a lot less about nutrition than you would expect—that in fact nutrition science is, to put it charitably, a very young science. It’s still trying to figure out exactly what happens in your body when you sip a soda, or what is going on deep in the soul of a carrot to make it so good for you, or why in the world you have so many neurons—brain cells!—in your stomach, of all places. It’s a fascinating subject, and someday the field may produce definitive answers to the nutritional questions that concern us, but—as nutritionists themselves will tell you—they’re not there yet. Not even close. Nutrition science, which after all only got started less than two hundred years ago, is today approximately where surgery was in the year 1650—very promising, and very interesting to watch, but are you ready to let them operate on you? I think I’ll wait awhile.”

Yikes! Keep that in mind when the next food fad comes out, whether they claim it is science based or not!

He continues by saying: “But if I’ve learned volumes about all we don’t know about nutrition, I’ve also learned a small number of very important things we do know about food and health. This is what I meant when I said the picture got simpler the deeper I went.

“There are basically two important things you need to know about the links between diet and health, two facts that are not in dispute. All the contending parties in the nutrition wars agree on them. And, even more important for our purposes, these facts are sturdy enough that we can build a sensible diet upon them.”

So what are the two facts that everyone agrees on?

Fact #1. Populations that eat a typical Western diet consisting of “lots of processed foods and meat, lots of added fat and sugar, lots of refined grains, lots of everything except vegetables, fruits and whole grains” suffer from the typical Western diseases of obesity, type 2 diabetes, heart disease, and cancer.

Fact #2. Populations that don’t eat that stuff don’t suffer from those chronic diseases.

Pollan tells us there “is no single ideal human diet” and that the human omnivore has evolved to handle a variety of different diets.

EXCEPT ONE: The Western diet that most of us now eat.

As Pollan says, “People who get off the Western diet see dramatic improvements in their health. We have good research to suggest that the effects of the Western diet can be rolled back, and relatively quickly.”

That’s what I do every day with my clients. I like to think of it in terms of eating “live foods” – those that have live vital life energy to share with us.

Perhaps grandma was right. You are what you eat. Eat simple, high energy foods, and as Michael would say –not too much.